1. Towards the preparation of novel polymers with permanent antifogging properties for use in greenhouse and food packaging applications

Polyolefin foils for the use in greenhouse and food-packaging applications are typically blended with various antifogging additives to prevent the formation of water droplets at the inside of the foils. The aim of the project is to develop polyolefin batches with innovative, permanent antifogging characteristics, which have different advantages compared to the currently available solutions. 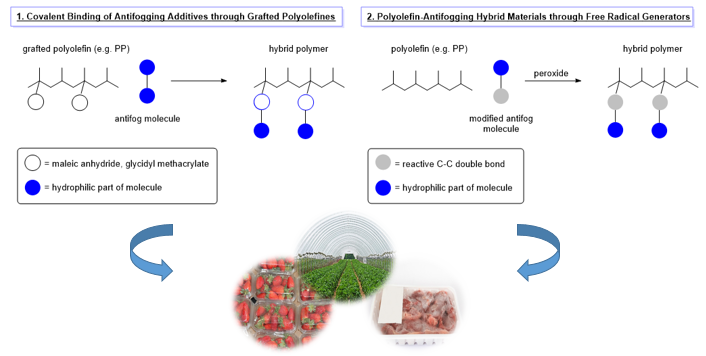 The first method to realize permanent properties in polyolefin foils is binding hydrophilic molecules covalently to the foil material through reactive extrusion with maleic anydride and glycidyl methacrylate grafted polyolefins. Therefor polar bifunctional molecules were chosen to compare the conversion rates and the antifogging properties of the resulting foils, depending on the reaction temperature, time, and miscibility with the polymer matrix. In an alternative strategy antifogging additives with reactive double bonds are used, which possess the ability of linking with the olefinic polymer in combination with free radical generators like peroxides. For this purpose, various types of peroxides with different decomposition temperatures are compared to identify the most efficient reaction conditions in a micro co-rotating twin-screw extruder set-up.

The project is funded by the German Federal Ministry for Food and Agriculture (Bundesministerium für Ernährung und Landwirtschaft, BMEL) and the Landwirtschaftliche Rentenbank.

2. Microplastics generation: Influencing the degradation behavior of thermoplastic polymers by use of smart additives

Pollution of the oceans caused by plastic parts is a rising, world-wide problem. A particularly important role in this respect is played by little plastic particles (microplastics), which probably arise by littering and subsequent degradation of the polymers. To investigate potential ways of their emergence, polymer degradation as it occurs in the oceans was simulated on a laboratory scale. Therefore different polymers were exposed to artificial seawater, UV-radiation, and mechanical friction caused by sand. The first step was the development of a suitable instrumental setup which combines all three factors.

Polypropylene (PP) and polyethylene (PE) are the main polymers found as waste and particles in the oceans. For the characterization of the polymer aging effects, analyses were primarily focussed on the damages of the reference bodies’ surfaces (platelets of 1.6 mm thickness and 20 mm diameter). In an advanced step, also the degradation of the bulk polymer will be investigated. To show surface damages, AFM, white-light-profilometry and light microscopy are chosen as appropriate techniques. To quantify thermooxidative effects, the polymer samples will be analysed by UV-Vis-spectroscopy to record yellowing, and via TED-GC-MS. Another method for the assessment of polymer degradation will be the use of FT-IR spectroscopy via ATR and/or transmission. These basic investigations aim at the hypothesis that microplastics accumulation in marine ecosystems can eventually be minimized by appropriate choice and/or chemical modification of the polymer additives. First examinations concerning the physical and chemical degradation and the interaction of the polymer additives with the polymer in artificial seawater shall set the basis for a better understanding of the degradation behaviour of PP in the presence of different polymer additives under marine conditions. 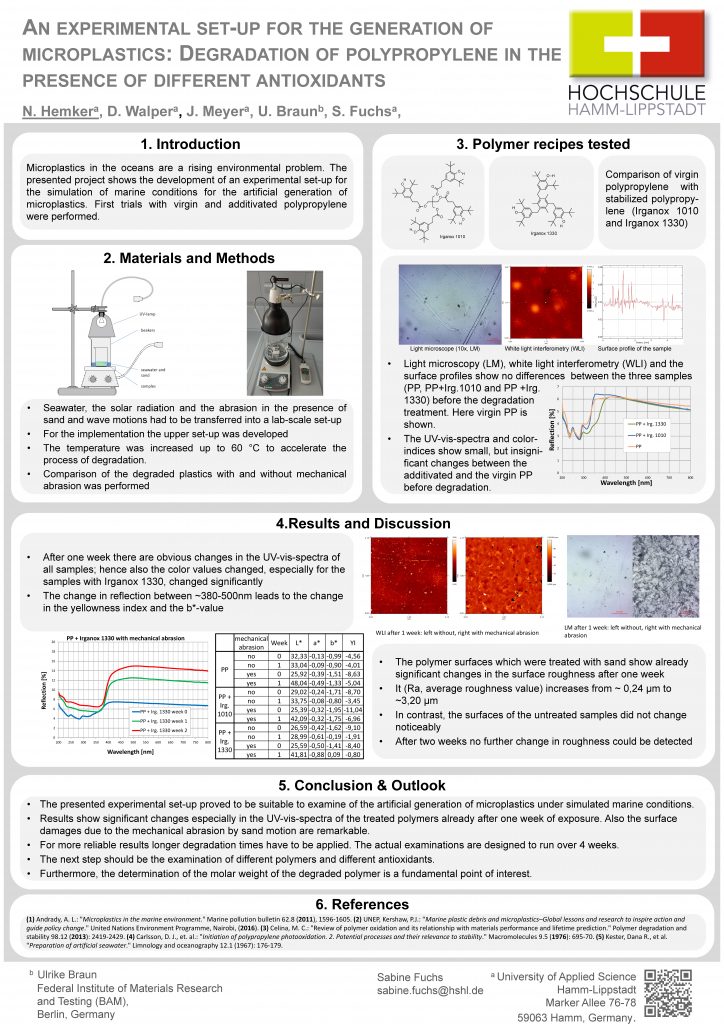 Films for agricultural use and/or food packaging comprise mainly of soft and thin polymer films made from polyolefins and other plastic materials. For agricultural use of those films especially the following properties are required: Weather resistance, anti-fogging properties, heat-retaining properties and transparency. Due to economic reasons there is an increasing demand for films that have also an extended lifetime before they have to be replaced.

The atmosphere within greenhouses and/or tunnels surrounded by agricultural films is normally saturated with water vapor, which evaporates from the soil or from the plants. Typically, the water vapor condenses dropwise on the inner surface of the cold film and causes fogging. Water droplets on the film greatly reduce the incident sunlight due to irregular reflection. Additionally, the water droplets can fall on the plants and result in physical damage and/or frequent occurrences of plant diseases.

Also for packaging applications most films are treated with antifog additives to avoid fogging on the inside of the film. Antifog additives are also incorporated into the polymer to maintain film transparency and good optical properties, making the packed products look attractive over storage time. The problem of fogging on the inner surface of packaging films occurs mostly with food products such as meat, oven-baked products, vegetables, fruit and similar, which contain significant amounts of water. There is still a strong need for further improvement of the state-of-the-art antifog additives properties and/or the lifetime of the antifog properties, as typically most conventional antifog additives tend to migrate and bleed out during use. This causes not only the limited lifetime of the antifog properties during use, but also migration of the antifogging additives from the polymer film into the packed food, from where it could eventually be consumed.

The objective of this future project will be the development and production of permanently antifog-equipped polyolefin films for agricultural and food packaging applications. Those films should offer high antifog efficiencies (and therefore reasonable prices) and cause no EHS concerns during use and at the end-of-life.